"With Atamira for the future, I see the young ones coming through and I am really excited about what the younger generation is going to create. I feel the time is right for our emerging choreographers and dancers to become established, make their full length works." Louise Potiki-Bryant

Ngāi Tahu 32, follows one man's journey through time to deliver a soul to a new generation. Carrying the coins for the sale of his land and the wairua of a girl who shines brightly on the horizon, his journey weaves history, whakapapa, creation and imagination. With Ngāi Tahu 32, Bryant creates a unique environment, celebrating installation, projection, choreography and a transformation of the performance space to take the audience on this journey.

Onepū is a striking and powerful new dance work. This expression of mana wahine - the intrinsic spiritual power of women has been inspired by a Kāi Tahu tradition as told by their rangatira Teone Taare Tikao in the book 'Tikao Talks — Traditions and Tales of the Canterbury Maori as told by Teone Taare Tikao to Herries Beattie'. Onepū (sand) is named to reflect the sand bank Pikopiko-i-whiti which encircles the world and upon which six atua wahine (female deities) stand within the different directions of the wind. These atua are strong forces of nature with the enormous power of controlling and releasing the principal winds of the world. Meet Hine-aroaro-pari whose echoes are heard on sea cliffs, Hine-rōriki-controller of the unruly northerly winds, Hine-aroraki, Māui’s mother whose name denotes the soaring flight of birds, Hine-pū-nui-o-toka from the south — the mother of all winds and Māui’s grandmother, Hine-rōtia who releases the west winds, one of which brings tidings of those who have passed on and Hine-hauone from the north east, who finds Māui at sea wrapped in a cloth and nurses him to life. Atmospheric lighting, unique costumes and skilled video design paint a sophisticated visual landscape. Within a black sand circle, the six transcendent performers dance to an original musical score composed by Paddy Free and Ariana Tikao, combining electronic music with the haunting sounds of taonga pūoro. Luscious solo moments of intensity merge with the power of the ensemble to embody these wild forces of nature and invoke a range of atmospheres inviting meditation on the different qualities each atua wahine brings to us. 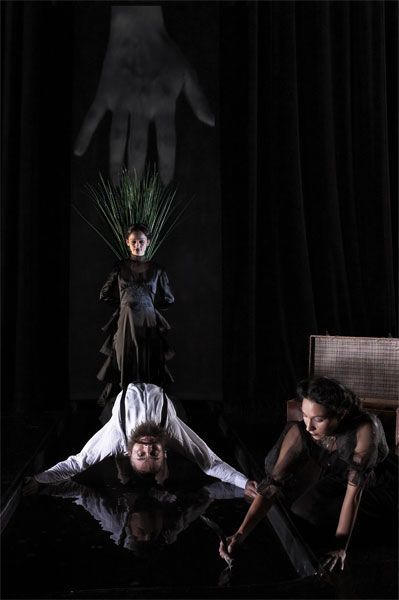 "The dancers move with admirable control and a dazzling flash of wiri to put the seal on their kaupapa."