Under the auspicious gaze of Matariki, Atamira Dance Company takes us on a journey through realms, through time and space, to honour not only those present but also those unseen. KAHA – Tripleboost, featuring Tomo VR Film, Still, and Kaha, travels through our intrinsic knowledge of te ao kikokiko, the world of the living, and reconnects us to memories almost lost.

As we descend the stairs to Q Theatres’ Vault, we descend into Rarohenga – a subterranean realm where the spirits of the dead dwell. 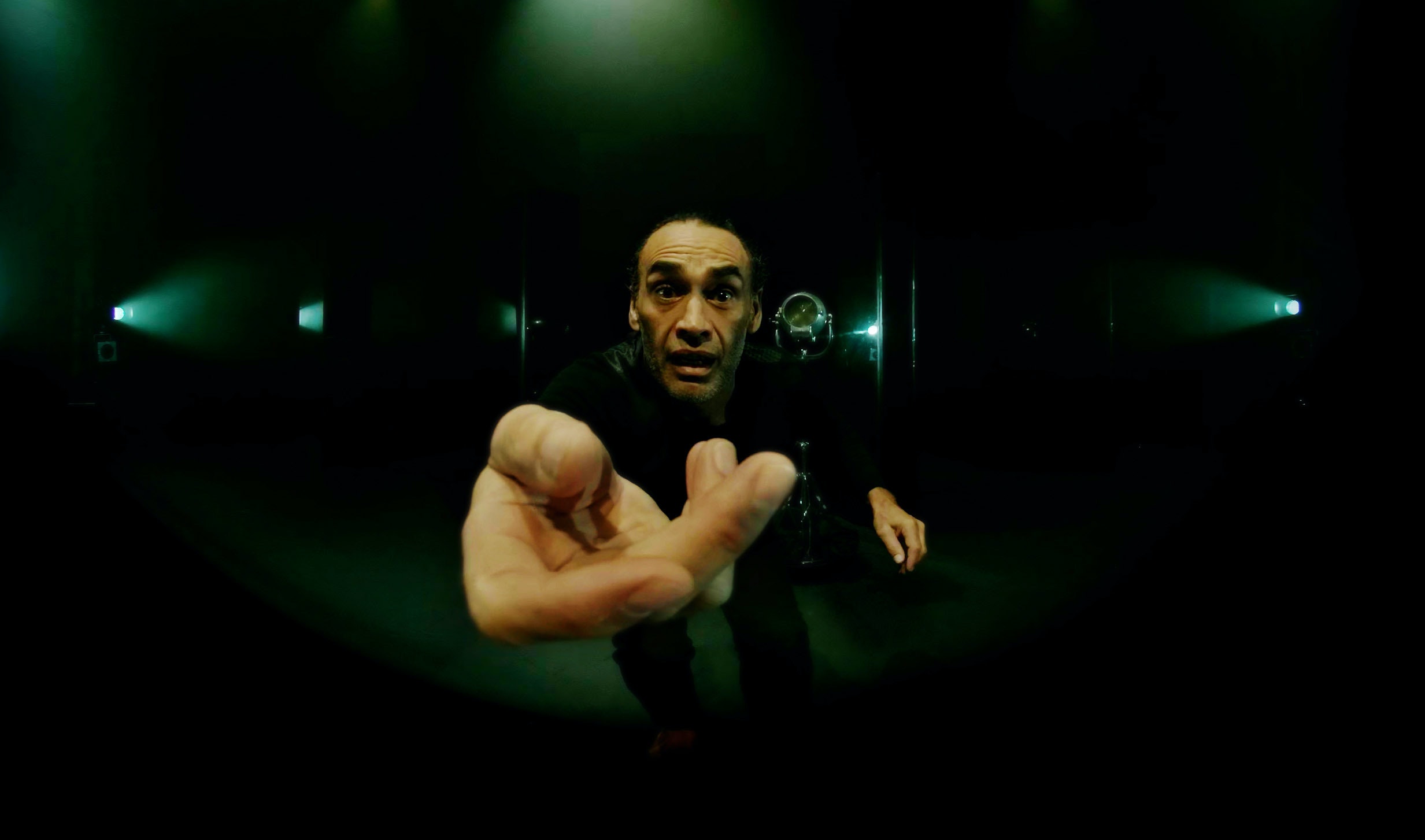 Tomo, a Virtual Reality film directed and choreographed by Gabrielle Thomas (Kāi Tahu, Te Atiawa ki te Tau Ihu) alongside filmmaker Ed Davis, deposits us into another time and realm. Once we adorn our virtual reality headset and headphones, i roto i te aha o te ao, the universe was in darkness. Three dark, reflective shapes, designed by Vanda Karolczak, hold the space.

A wairua, spirit, personified by Sean MacDonald (Ngāti Kahungunu, Ngāti Raukawa, Tuwharetoa, Rangitane) travels on a pathway that is unseen but always there. Through the intimacy and attentiveness of virtual reality, you stare directly into his eyes, see the sweat dripping down his face. Three wāhine, women, appear to help the wairua on his journey into the world of light. Weaving through space, they highlight the reflective potential of each other and their tīpuna, ancestors, behind them. Dancers Bianca Hyslop (Te Arawa), Abbie Rogers (Ngāi Tahu, Te Arawa), Cory-Toalei Roycroft (Ngāti Tūwharetoa, Ngāti Kahungungu, Ngāti Raukawa, Ngāti Kauwhata), Madison Tumataroa (Ngāti Kahungungu, Ngāti Pāhauwera), are mesmerizing and dynamic whilst Sean MacDonald struggles with inner demons on his journey forwards. We leave the Vault wondering where time has gone and enter into the wharenui of the loft. Set and lighting designer Vanda Karolczak has transformed the black box theatre into the memories of my childhood. The warm and welcoming space is framed by chairs on two sides, and hanging cloths resembling either windows or tapestries (depending on the light) suspend down on the other sides.

MacDonald renters this world of light and sits to observe his surroundings. We are welcomed into the space through karanga by Madison Tumataroa, surrounded by her fellow performers. They stand together, bringing the unseen into the present realm. Using their ancestral voice, they call to our tīpuna. Kiri Key (Te Arawa, Ngāti Manu, Te Rarawa, Hamoa), te reo composer and advisor, has worked closely with Madison on karanga, and with the rōpū on waiata, haka, and te reo used in the performance. I’d also like to take this time to congratulate Madi Tumataroa on her debut performance with Atamira.

As the vibrational energies register in and amongst the realms – all but Sean MacDonald leave the space.

Through a solo performance, Still, MacDonald meanders from the past to present. This unintentionally autobiographical work shows that he’s still here after a profound 30+ year career in the industry. Lofting through space, initiating from his kōiti, little finger, Sean highlights the importance of silliness in self and in creative processes. His detailed expressions tells of joy, of curiosity, of struggles and triumphs. We are privy to his inner dialogue as he reflects over memories of his own and of others, all whilst cloud-gazing out the window of this wharenui. Dancers transform with the ebb and flow of the ihi and mana around them. Boundaries and challenges from the past few years dissolve away as Kaha assaults the senses. The work by Abbie Rogers, Tiaki Taonga,focuses on “what is taonga?” and how taonga finds its voice. Performers enter the stage one at a time and embody their personal taonga. Their trance like qualities and vibrant gestures sweep across the stage in a captivating spell. Sherrick Martin uses te pou, the post, to link one back to their “ancestral homes”, values and rituals in his work Te Pou. Electric and vigorous, the dancers move in unison, weaving through one another. Building each other up as they seek to communicate through this “ancestral frequency”. In Whakapipi 33, Dana Moore-Mudgway explores how the skeleton is used as a central point “of remembrance”. With the dancers facing away from us, their spines slowly ripple with the history of our people until it erupts out in all directions, unveiling hidden messages. Caleb Heke listens “to the whispers of Papatuuaanuku” to share knowledge and histories through his work, Mai Papatuuaanuku ki te Ao. The performers appear to see and hear things the audience can’t as they venture across the stage, traversing this universal space with a knowledge that is carried through their blood. Oli Mathiesen’s work, Arero Ma, poses what it’s like to be Māori and takatāpui in a post-colonial heteronormative world. Dancers extract whakapapa by pulling on a string linked to their wairua. Using Text and speech to build to a cacophony of jarring energy, the dancers fight to be heard and seen over one another. Finishing with a haka, the performers leave us with one final call to our ancestors. They challenge us to reflect on the colonised self and to encourage the revitalisation of te ao Māori. He aha te mea nui o te ao, he tangata, he tangata, he tangata. What is the most important thing in the world, it is the people, the people, the people. In the infamous words of Jack Gray, “Wake up Māori and carry on”, and that is exactly what Atamira have embodied here tonight.

Kaha is a testament to the kaupapa of Atamira and all those who have carried the name.